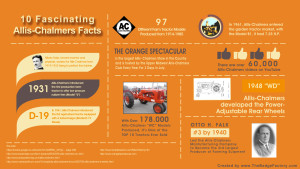 Just 18 short months ago, I knew very little about tractors.  I had no idea there were so many brands, each with so many different models and features, made to perform so many different jobs on a farm.  While my knowledge of the brands has expanded, I still have a great deal to learn.  A fun way for me to explore any subject is to get visual.

So, after reading dozens of articles about the history of Allis-Chalmers, I put together a list of ten fascinating facts and created this cool infographic to share that information.  Here are some of the things I discovered:

1 – The Allis-Chalmers Manufacturing Company produced 97 different models of farm tractors over the course of 71 years, from 1914 through 1985.

2 – Famed inventor and physicist, Nikola Tesla worked for Allis-Chalmers in Milwaukee from 1919 to 1922.  He spent most of his time working on perfecting the Tesla turbine with Hans Dahlstrand, the head engineer at Allis.

4 – In 1931, Allis-Chalmers was the first company to use and sell low pressure rubber tires on production farm tractors.  It just so happens they introduced them on the model “U” which was also the first AC tractor to feature the Persian orange color scheme.

6 – In 1961, the Allis-Chalmers Model “D-19” Diesel featured the very first agricultural tractor equipped with a turbocharger.

7 – By 1940, Otto H. Falk, president of Allis-Chalmers had led the company to become the third largest producer of farming equipment.

8 – In 1948, Allis-Chalmers developed the first power adjustable rear wheels on a farm tractor.  This technology appeared on the model “WD”.

9 – When doing a search of YouTube, I found that there were more than 60,000 videos uploaded that featured Allis-Chalmers tractors.

Learning about the people and innovations made by Allis-Chalmers was an amazing journey through history!  Please feel free to share this infographic with your friends who love antique tractors.